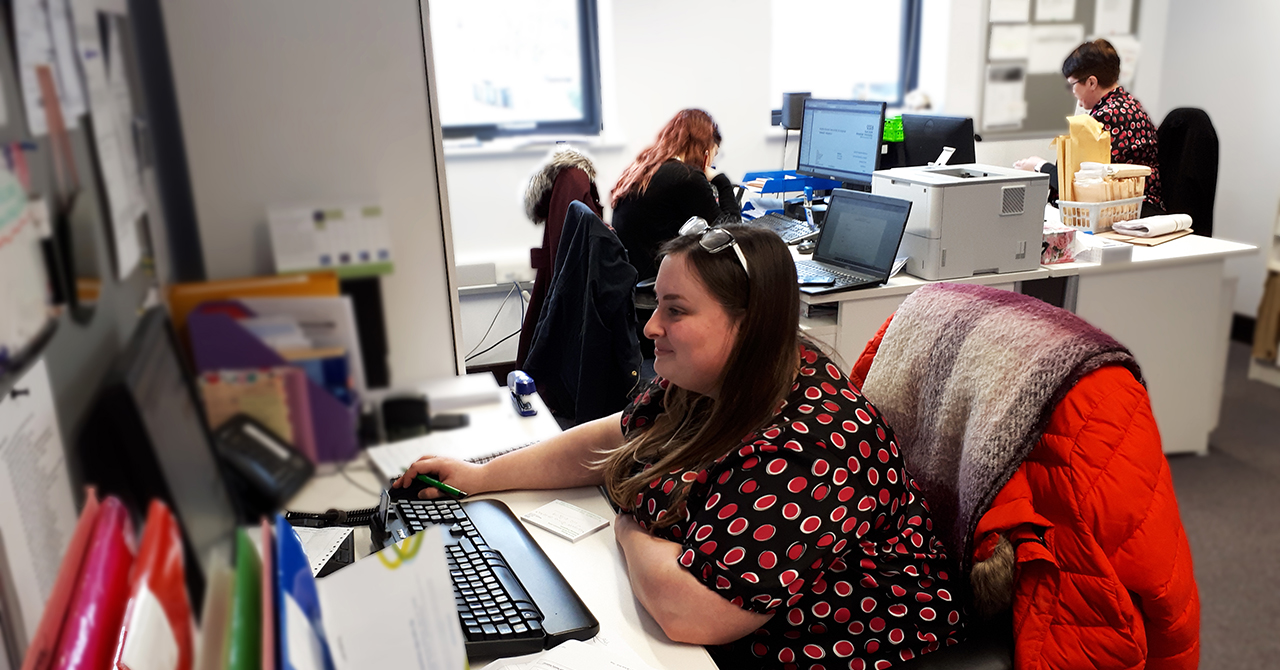 “After recently finishing at college; I was then unemployed when I saw the job role at the medical practice advertised online. The fact that the Apprenticeship was involved and that I could work and learn at the same time, meant that without hesitation I applied for the position. Thankfully, I was successful in getting the job! I had previous qualifications from school, but I re-took Maths and ICT functional skills to get me to the standard needed to be able to complete the Apprenticeship. I have always struggled with Maths, but with the training and support I received within my Apprenticeship, I managed to succeed and passed both qualifications.

My Apprenticeship has allowed me to grow in my role and be recognised for what I do/did with my diploma. Along the way, I have learned important business functionalities, develop people skills, understand professionalism in the workplace and understand patient/doctor confidentially, data protection and medical terminology. I originally started on reception at the beginning of my Apprenticeship, but had no medical terminology knowledge and struggled. This was identified and supported by the practice and I was brought into the office to learn procedures and I note medical terminology down as evidence within my coursework.

I’ve enjoyed gaining new skills and knowledge within a Doctors Surgery and learning the tasks that go to hand within this working environment. It’s a demanding, fast-paced industry, with documents needing to be scanned, appointments requiring booking, what gets sent to who, audio letters needing to be typed up for Doctors and so these were all new skills that I was honing in on and improving further even though I had already achieved a ‘C’ in my English GCSE, I feel my writing skills have been put into practice further and have also developed in this role. The learning aspect could be challenging at times, due to the time factor and being busy, but I decided to be strict with study times and set time aside to organise my work around my workplace and workload. I would 100% recommend IPS as a training provider; IPS has trained industry professionals and my trainer has previously worked in a doctor’s surgery as a Practice Manager and so I had the added knowledge of her experience which was so beneficial. My trainer was always on hand whenever I needed her by phone or email.

I have been at White Cliff Practice for over two years and the knowledge I have gained in such a short space of time through my apprenticeship, while learning and working has amazed me. The qualification has been such a confidence boost, I was so shy when I first started, but now I have the confidence to put protocols such as data protection in place, ensure I am speaking to people on the phone in the correct manner for the situation and asking security questions or if it’s the hospital, asking for their NHS number to comply with GDPR and Data Protection.

The internal apprenticeship process here at White Cliffs has also improved, as we have taken on two new apprentices who are in the role that I was a few years ago, I now act as a mentor for these apprentices and as I have been in their shoes already, I know first-hand, what the experience entails and so am happy to support them on their journeys too.

It’s a fantastic experience and once you’ve achieved the qualification; you’ve proved yourself. It doesn’t have to end their either as there is always room to progress. I now have this medical knowledge that I can take into any medical industry such as the hospital or private health care. I never thought that when I started on reception, or the office doing scanning and post which is everything that the two apprentices are doing now; I would be a medical secretary and mentoring others in such a short space of time. “When I joined the practice, I always joked to my Practice Manager that I would be a Medical Secretary one day and I got there! – Nothing is impossible.”